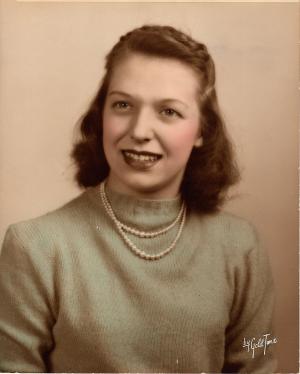 Evelyn Ann Barnes, former resident of Warren, Ohio, and current resident of Nelsonville, Ohio, passed away on Wednesday evening, September 8, 2021, at The Laurels of Athens in Athens, Ohio. She lived a full life, having just celebrated her 90th birthday. She had suffered a fall, and broken hip, from which she was unable to recover.

She was the daughter of Matthew and Anna (Miklosky) Horvath of Warren, Ohio. On April 21, 1956, Evelyn married the love of her life, Harold (Hal) Barnes, also of Warren, Ohio. He won her over shortly after he had returned from the Korean War as a Master Sargent in the U.S. army, before working for Republic Steel as a supervisor. They shared 42 years of marriage together until Harold’s death in 1998.

She is survived by her two daughters, Cindi Wilson of Luxembourg, Europe (Francis Sonnetti) and Sue McAdoo of Athens, Ohio, and a grandson Benjamin McAdoo (Gabrielle) of Hartford, Connecticut.

She was proceeded in death by her parents, her two brothers Matthew Horvath and Joseph Horvath and her husband Harold.

She was a graduate of Warren G. Harding High School in 1949. She worked in diverse jobs ranging from scooping ice cream at the local café, to making shells during the Korean war, to creating wiring assemblies as a Method’s Lab technician at the Packard Electric operations. After children, she switched to Girl Scout Troop Leader and other activities to support her daughters. She shared her husband’s hobby of powerboat racing serving on the Judge’s Stand at Three Rivers Outboard Racing Association (TRORA) for more than 30 years.

While living in Warren, she was an active member of the previous SS. Cyril & Methodius Catholic church, participating in pirohy sales, ushering at mass and attending bible studies. In her later years, she enjoyed gardening, writing to her grandson and playing Bingo at the Nelsonville Senior Center.

She will be remembered for her selfless caring for others, her quick sense of humor and her bright smile that brought joy to everyone.

The family wishes to express their appreciation to The Laurels of Athens for their loving care during her final days.

Family and friends will be received at Peter Rossi and Son Funeral Memorial in Warren on Monday, September 13 from 9:00 to 10:00. The Funeral Mass will be held at St. Elizabeth Ann Seton Roman Catholic Parish in Warren (SS. Cyril & Methodius site) at 10:30. Following the service, she will be laid to rest at Crown Hill Burial Park Cemetery in Vienna, Ohio.

Arrangements were entrusted to the Sinchak & Sons Funeral Home.

To send flowers to the family or plant a tree in memory of Evelyn A Barnes, please visit our floral store.